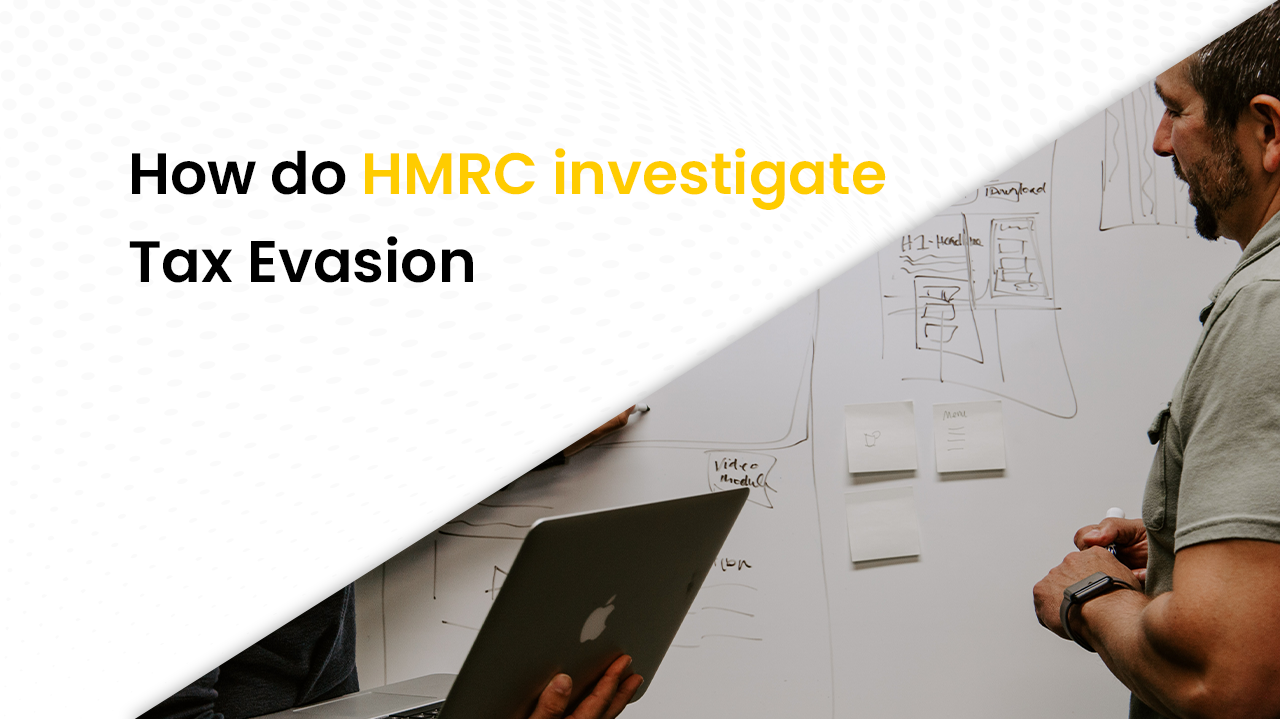 How Do HMRC Investigate Tax Evasion

Have you ever wondered how HMRC knows if you are not paying tax properly or not paying? Do you know how they investigate tax evasion?

While most people abide by the law and pay their taxes, there are those who deliberately and dishonestly evade tax, steal public funds, or cheat the system in other ways.

The government and HMRC are taking a firm stance on tax fraud as part of a significant crackdown on financial crime in the UK. As a result, mistakes in tax returns are becoming more likely to be picked up by the HM Revenue and Customs fraud investigation service.

In this article, we will discuss HMRC’s tax evasion investigation. Let’s get started;

What is an HMRC Tax Investigation?

HMRC can investigate your taxes anytime to see if you’re paying what you owe.

You have to cooperate with a tax investigation, but this does not mean you are guilty. As long as you have reasonable accounting procedures and an accountant who can help you out, a tax investigation should not be too complex or time-consuming.

They’ll usually contact you first, either with a letter or a phone call and let you know what specific details they want to look at.

If you use an accountant, HMRC may contact them instead of you. But your accountant should be in touch to tell you about it. On average, every five years or so, tax audits can be expected. Fewer than two per cent of income tax and corporation tax returns are investigated each year.

There are three different levels of audit that HMRC can carry out:

An HMRC enquiry for the total of your financial documents will happen during a comprehensive investigation. Typically, they feel there is a strong possibility of a mistake in your tax. When examining limited liability corporations, they may look carefully at the company’s directors’ tax affairs and the business’s operations.

HMRC will review aspects that they find significant to your tax return, such as inconsistencies in revenue. Their reviews check the information on one or more specific points found during the inquiry.

For instance, HMRC may have information about interest from a building society that is not consistent with the information on your return. They will need more information in this case and ask you for more detailed responses/explanations.

HMRC is known for carrying out “compliance checks” on the accuracy of some tax returns. Random checks can happen at any time, regardless of what your accounts or trigger alerts have been set to. Random inspections will be carried out on some organisations, while risk-based assessments of others will be made.

How to Report Tax Fraud?

If you report this to HMRC, they will ask for more information on what evidence is available and how it was obtained. They might also ask for your name, contact number, and address so they can follow up on your case.

How Do HMRC Investigate Tax Fraud?

On occasion, HMRC conducts random investigations of persons and businesses using the Connect system. However, this is a relatively uncommon occurrence.

HMRC uses a hotline to allow the public to report evasion and tax fraud. The service, which combined two pre-existing hotlines, now covers any kind of tax fraud and evasion.

This includes PAYE and national insurance, undisclosed offshore investments, tax credit fraud and VAT fraud. It said it received 113,000 reports from the public providing information to the department in its last financial year.

In some cases, people cannot determine where HMRC got its information.

Social media data has been an essential tool for HMRC. They are looking at it to ensure that people aren’t living a lifestyle that cannot be supported by their income.

Online social media platforms are a powerful resource for investigative work and risk analysis. HMRC investigators have performed more investigations by looking at those platforms such as Facebook, LinkedIn, and Twitter for comments the individual may have made.

According to HMRC, it “will view, analyse, record, and keep online data” accessible to the public. This includes blogs and social networking sites that are not under personal security settings. It was verified in a recent update to the organisation’s policies.

At any given time, there are around 300,000 SARs filed. Annually, over 30 million SARs have been filed since November 2013. The SAR data has been transferred to HMRC’s Connect database every month.

If a bank or professional adviser has suspected tax evasion or terrorist financing is occurring, they must report it. 90% of the complaints come from banks and other finance firms, with the remaining 10% coming from lawyers, accountants, estate agents.

It’s no surprise that HMRC pays close attention to these reports as tax evasion is an offence under the money laundering rules.

Failing to file tax returns and make payments on time can lead to a financial penalty. There are also penalties if you carelessly report information on your tax return. The most severe penalties are applied to those trying to avoid paying tax and hide that.

Penalties are charged on a sliding scale based on why the error occurred. The severity of the penalty will depend on what caused that particular mistake to happen and can be anywhere from a warning to permanent account termination.

If somebody has taken part in severe tax evasion or fraud cases, they may face criminal prosecution.

Penalties can be anything up to 200% of the tax due and a fine of up to £5,000 for income tax evasion and £20,000 for VAT evasion. Culprits can also receive a maximum jail sentence of up to seven years.

What triggers an HMRC investigation?

Typically, HMRC conducts claims compliance checks when statistics presented on a return appear to be incorrect. Suppose a tiny firm suddenly files a huge VAT claim, or a large corporation declares a negligible amount of tax. In that case, HMRC will very certainly notice this.

How long does a tax evasion investigation take?

An HMRC tax fraud investigation procedure is often finished within 12 months. However, this time frame varies according to the complexity of the case and your willingness to cooperate with their requests.

In conclusion, the HMRC investigation process is complex and lengthy. The company involved must have a professional team to ensure that they are not missing any vital information.

Nowadays, the process of taxation is constantly changing. HMRC has come up with a new system that makes the process more complex, lengthy, and expensive. To avoid these potential pitfalls, your company must have a professional team of people to ensure that they are not missing any vital details.