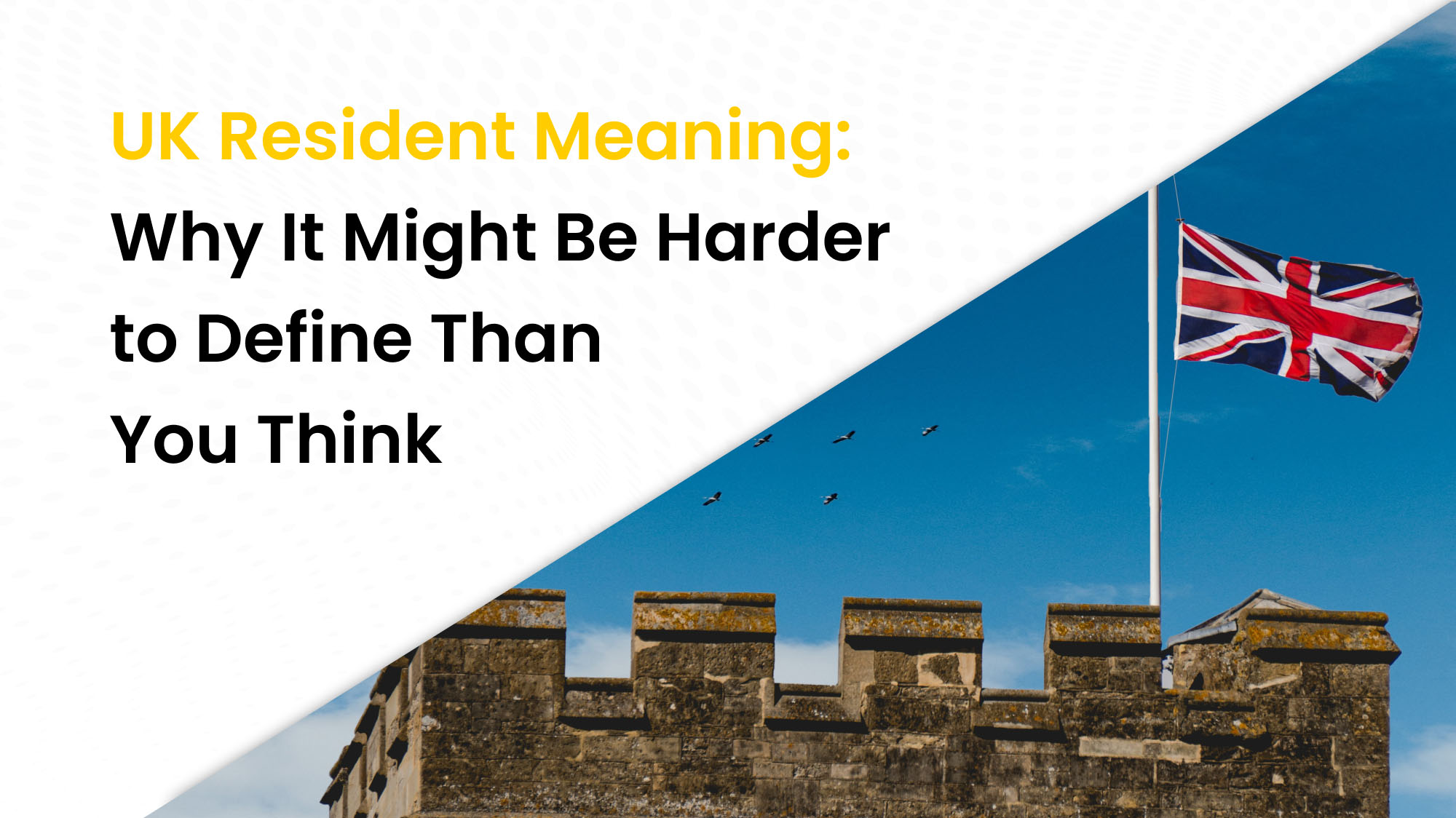 UK Resident Meaning: Why It Might Be Harder to Define Than You Think

Am I a UK resident? It’s a simple enough question to answer, right? After all, you know where you live. However, as anyone who works abroad, spends a lot of time there or otherwise isn’t in the UK 24/7, UK resident meaning, at least for tax purposes, can be rather murky to define.

HMRC introduced the Statutory Residence Test on April 6th, 2013 to determine the tax residence status of individuals with ties to the UK.

The Statutory Residence Test, while at times difficult to understand, is critical in determining your UK tax residence status. Being a tax resident of the UK means that your worldwide income is subject to UK tax, and failure to properly declare and pay tax on any income can result in penalties and fines.

Because of the complexities of the Statutory Residence Test, it is always a good idea to seek professional advice from a tax expert who has experience determining your residency status correctly.

The following information is provided for educational purposes only; you should always consult a tax professional to ensure that you fully comprehend the Statutory Residence Test and your UK tax residency status. You can, of course, enlist the help of Pearl Lemon Accountants to do that, by contacting us here.

In simple terms, if you meet the automatic overseas test but not the automatic UK test or the Sufficient Ties Test, you will be considered a non-UK resident for tax purposes.

If you do not meet the Automatic Overseas Test but meet one of the Automatic UK Tests or the Sufficient Ties Test, you will be considered a UK resident.

How Many Days Have You Spent in the UK? What HMRC Says

In the simplest terms, you would be considered a UK resident if you spent more than 183 days in the UK during a tax year. Calculating the number of days spent in the UK, on the other hand, is not simple.

The HMRC established a set of criteria to determine if you spent a day in the UK. If you arrive in the UK at midnight on any given day, you are usually considered to have spent a day here.

However, there are three other factors to consider: The deeming rule; transit days; time spent in the United Kingdom due to unusual circumstances

First, there’s the deeming rule, which considers whether you have three UK ties for the tax year or been present in the UK for 30 days or more without being present at the end of each day

Second, there are transit days. Under the Statutory Residence Test, transit days are usually not counted as full days. A transit day is when you enter the UK from another country on your way to another.

You must not have done any other business during your time in the UK for it to be considered a transit day, and you must depart the day after you arrive. Conducting a meeting or meeting up with business associates for lunch are examples of other types of business. Having breakfast or dinner with your Mum and Dad, on the other hand, would be considered part of your transit.

You should seek clarification about your activities while in the UK, as they may have an impact on the number of days you spend here.

Finally, if you are in the UK due to exceptional circumstances, such as a bereavement, you may be given special treatment in terms of the total number of days you have spent here. COVID-19 has come into play for many here recently, something we will discuss in a minute.

The amount of time and type of work you did in the UK during your stay may also have an impact on the number of days you spent here with us. Location, type of work, and whether or not the work is voluntary are all factors to consider.

If you meet any of the following elements of the Automatic Overseas Test, you will be considered a non-UK resident.

If the Automatic Overseas Test is inconclusive or you fail all of the components, the Automatic Residence Test should be considered. You will be considered a UK Resident if you meet any of these criteria. Because complicated calculations are involved once again, you should always seek advice before making any decisions about your residency status.

For starters, if you stay in the UK for more than 183 days during the tax year.

Second, if you have a home in the United Kingdom and spend 91 days there in a row, including 30 days during the tax year. You will also be considered a UK resident if you have no permanent residence outside the UK and spend no more time there than is permitted.

Finally, if you work in the United Kingdom for a total of 365 days without taking a significant break. However, there are a number of calculations and requirements to meet, so if you are in any way unsure, please seek advice (we’re here!)

If you’re still unsure about your residency status after reviewing the previous tests, you should consider the sufficient ties test.

The Sufficient Ties Test determines whether you have sufficient ties to the UK to be considered a resident. The following are examples of ties:

People who have been unexpectedly stuck in (or out of) the UK as a result of government policies relating to the COVID-19 pandemic’s rightfully worry about the direct impact on their tax residency status in the UK. Governments are closing borders or putting people in quarantine, which will affect where they are legally required to pay taxes.

This disruption is causing significant concern for British expats who have returned home, as well as foreign nationals who visited the UK during the Coronavirus pandemic, as they are required to spend a limited amount of time in the UK in order to maintain their UK non-resident tax status.

Unfortunately, when authorities impose travel restrictions, lock-downs, and border closures (as they have in most countries due to the Coronavirus pandemic – especially when combined with health concerns), it is highly likely that more people will spend more time in the UK, potentially resulting in more people becoming UK tax residents when they really didn’t mean, or want, to.

Is COVID-19 An Exception? What HMRC Says

While the Statutory Residence Test is a strict set of rules in most cases, it does include a list of exceptions that can be used in unusual circumstances. This allows for the exclusion of certain periods of time spent in the United Kingdom. The maximum number of days that can be ignored in exceptional circumstances under the standard exemptions is 60. (sixty).

The HMRC has defined what it considers to be “exceptional circumstances” in the following ways:

“Days spent in the UK may be ignored if the individual’s presence in the UK is due to exceptional circumstances beyond their control. This will usually only apply to events that occur while an individual is in the UK and which prevent them from leaving the UK.”

“Exceptional circumstances will normally apply where an individual has no choice concerning the time they spend in the UK or in coming back to the UK. The situation must be beyond the individual’s control.”

Here’s what HMRC consider what an exceptional circumstance might be:

“The type of events which may give rise to exceptional circumstances will be, by their nature, out of the ordinary and it is difficult to be prescriptive about what characteristics such an event would exhibit. However local or national emergencies, such as civil unrest, natural disasters, the outbreak of war or a sudden serious or life-threatening illness or injury to an individual are examples of circumstances that are likely to be exceptional.”

Despite HMRC’s determination that the coronavirus outbreak was a “exceptional circumstance” as defined by the conflicts and exceptions to the rule, there is a risk that some individual decisions will not be considered beyond their control.

For instance, there may not be a travel ban to a specific country, but you may choose to stay in the UK rather than travel. It’s currently unclear whether a decision based on that information would be considered an “exceptional circumstance,” especially in light of HMRC’s current guidance.

Even with the restrictions and the pandemic being a clear “exceptional circumstance,” it’s easy to see how the HMRC could rule that certain amounts of time spent in the UK due to the coronavirus are not exceptional if you take the guidance literally.

To help clarify whether the “exceptional circumstance” rules should be applied in a specific situation, we created the case of Simon:

Simon works and lives full-time in another country, but he has family in the United Kingdom.

Simon is a lawyer who lives and works in Dubai. Simon’s family remains in the UK because he works full-time in the UAE while also maintaining his non-resident status in the UK (using the “full-time work overseas” test).

Simon would have to work full-time overseas to meet the requirements of this test (with no significant gap from his overseas work exceeding 31 days). He’d also have to stay in the UK for less than 90 nights and work for less than 30 days.

He carefully manages his residency status on a year-by-year basis with the help of an accountant and is classified as a non-resident of the United Kingdom, which means he owes no UK tax.

Simon has already spent 55 nights in the UK this tax year due to his wife’s illness and hospitalisation due to Coronavirus. Thankfully, his wife recovers completely after 55 days, but travel restrictions have been imposed during Simon’s time in the UK, resulting in him spending an additional 90 nights in the country, bringing his total time in the UK to 145 nights for the tax year.

Simon would have only spent 85 days in the UK if the 60 days had not been removed due to “exceptional circumstances,” meaning he would still be classified as a non-resident. The exceptional days test, however, does not apply to the 31-day/significant break test for working full-time overseas under current law.

As a result, despite the clear exceptional circumstances that brought him to the UK and forced him to stay, Simon would have failed the test and thus likely triggered UK tax residency.

If this is the case, Simon may face additional UK tax liabilities on his employment income that he would not have faced otherwise, due to current tax laws.

That the “exceptional circumstances” rules were not designed with such a large-scale pandemic in mind.

Furthermore, a specific Coronavirus exception could be introduced in the future, making it clear that any disruption during a specific time period will be treated more leniently. While we are optimistic that this will happen, it hasn’t yet.

As you can now see, UK tax resident meaning is anything but clear-cut. It’s open to interpretation and to be being affected by things like COVID-19. It can be really tricky to figure out every tax year. That’s why the most sensible thing anyone who spends time in the UK, but does not want the tax liabilities that might come along with it, should make working with an experienced in the field tax expert a priority. You can enlist Pearl Lemon Accountants to do that for you by contacting us here.

How Do I Change My Tax Code

How to Avoid UK Tax

How Do I Pay My Corporation Tax?

How Do HMRC Investigate Tax Evasion
How Does Emergency Tax Work