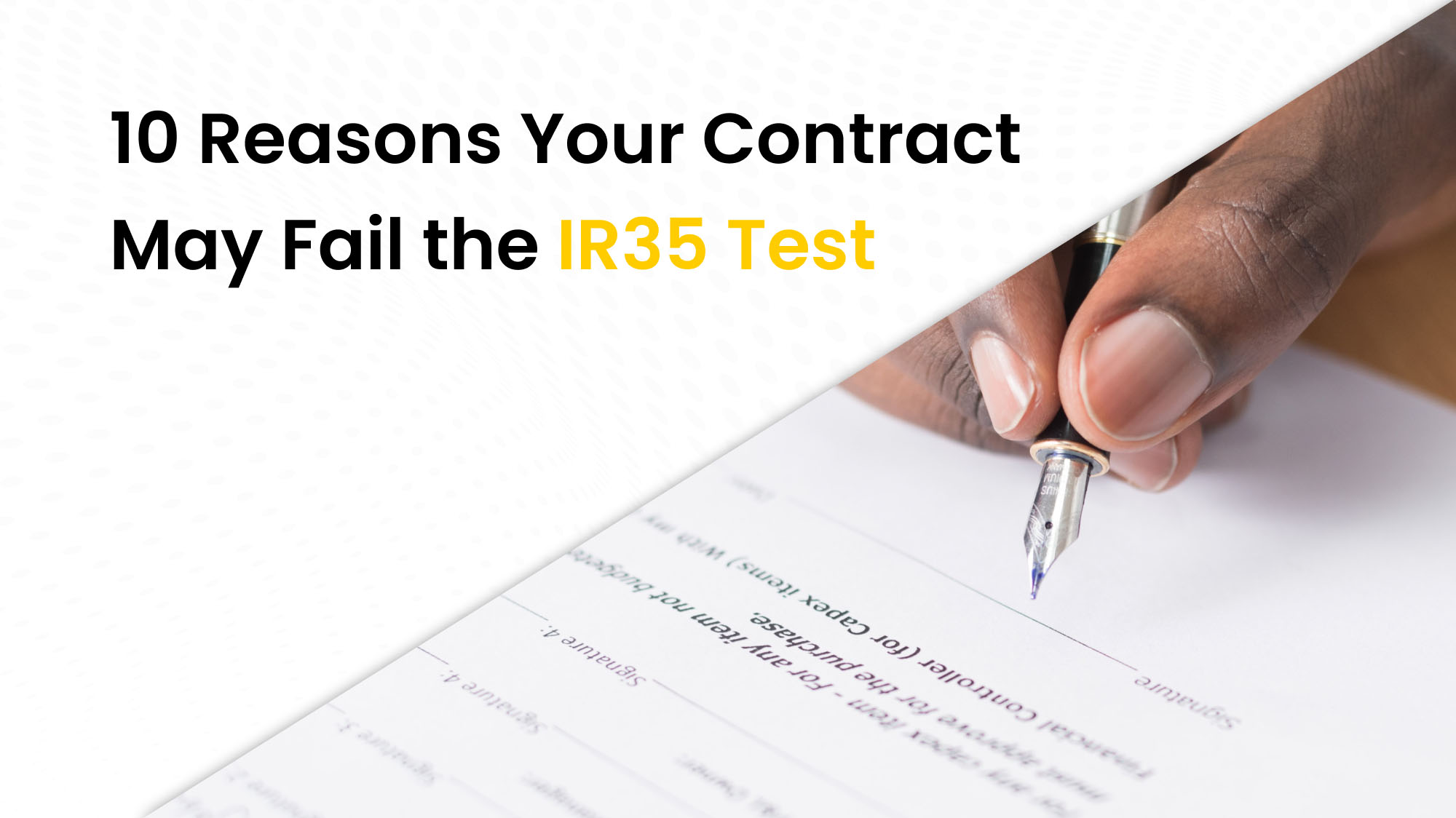 10 Reasons Your Contract May Fail the IR35 Test

Are you a contractor, or representative of a personal service company trying to keep your contracts outside IR35 and pass the tough IR35 test? If so, this blog post is for you.

If, as an entity we just described, you sign a contract that falls under IR35, you could end up paying a significant amount of extra tax and National Insurance Contributions, either during the contract or later if HMRC investigates you.

Nearly all IR35 issues that could mean your contract is caught could be resolved before they become a problem if you get your contract reviewed for IR35 before signing it and in good time to allow negotiation with the agent or client.

Here are ten things that contractors should look for in their contracts to see if they are IR35 compliant:

Contractors should attempt to double-check whether the advertised position is for a legitimate contractor or an employee. If the contract is to cover a role that was previously filled by an employee, there’s a good chance that the contract, and the client’s expectations, will be for a worker who shares all of the characteristics of an employee, rather than a genuine contractor working outside of IR35 and on their own dime. Check the background of the contract, or it may fail the IR35 audit.

HMRC may have already left its imprint on the client’s business, having looked into previous contractors in specific roles and ruled that they fall under IR35. The contractors may have moved on to a new role outside of IR35, and the client may have re-advertised for a contractor, but will not want to advertise that the position is within IR35.

Because this type of IR35 trap is difficult to spot, it’s critical that the contractor receives a watertight contract; otherwise, the contractor will fail IR35.

HMRC has a finely tuned nose for contracts that have been cobbled together from various sources in order to save money on legal fees – this is often an instant IR35 fail. A contractor may get a contract like this past an agent or client (who aren’t subject to the IR35 penalties), but tax inspectors see thousands of documents like this every year and will immediately place a contractor under the IR35 umbrella.

When contractors must draft their own contracts, they should obtain a framework or draft from a reputable source and, at the very least, have it reviewed by an expert before sending it to the agent or client. If they don’t, the contract is likely to fail IR35.

The traditional tests of employment that will place a contractor inside IR35 are supervision and control. Control can be found in contracts under the headings of:

All of these clauses are common in employment contracts, but they should never appear in a contractor’s business-to-business services contract, as it will most likely fail IR35 tests. True contractors, not the client, decide when and how they work.

Watch Out for Substitution

Another common employment criterion is whether the contractor can provide a replacement. If they truly can and do so on a regular basis, the contract is almost certainly outside of IR35.

However, if there is no right of substitution clause in the contract, or if the client explicitly states in correspondence, such as emails or other records, that the contractor should never consider sending in a substitute, the contract will almost certainly fail IR35.

Under the contract, is it possible for the contractor to work on projects for multiple clients at the same time, or does the client have the right to veto other contracts? If the contract seems to specify exclusivity, stating x hours per week at y rate on an ongoing basis and requiring the contractor to take whatever work the client throws at them, IR35 is almost certainly violated as it implies MOO is present aka a ‘mutuality of obligation’.

Regular, guaranteed weekly or monthly work specified in a contract often appears to be more akin to an employee’s wage contract than professional fees paid to a contractor’s service company.

To stay IR35 compliant when project milestones are met, a contractor should issue an invoice. If the client requests a weekly invoice, it should include information about the work done, as well as the hours worked and the rate. Any contract errors must be corrected by the contractor on his or her own time, as stated in the contract.

Contractors are frequently required to use the client’s equipment, possibly for reasons of safety and security. If there is a good business reason why the contractor cannot use their own equipment, this is usually not an issue that will cause a contract to fail IR35.

Contractors should, however, buy their own equipment if possible and use it whenever they can; if necessary, a contract clause highlighting this point should be included.

Too Many Organizational Ties

If a contractor becomes so ingrained in a client’s organization that they appear on phone lists, organizational charts, are volunteered to be a fire marshal, or have staff reporting to them, the contract fails IR35.

The contractor should maintain a professional distance from the client’s corporate structure and only take on responsibilities that are not specified as part of the project in their contract when it is industry standard, such as safety responsibilities in construction or offshore work. No matter what their contract says, a contractor can be found to be inside IR35 if they appear to be an integral part of the client’s business.

The importance of evaluating the IR35 status of every contract before signing it is demonstrated by these common IR35 fail points. HMRC will be looking for evidence that your contract falls within IR35, so make sure you do your homework and don’t give the taxman the proof they need to force you to pay tax as a “disguised employee.”

IR35 has become a highly complex area of employment and tax law after two decades of case law and legal precedents, so you should always seek expert advice. Pearl Lemon Accountants can act as those experts, ensuring that every contract you sign is compliant with IR35 regulations. To learn more, please contact us today.

What happens if IR35 catches you?

If IR35 catches you, you must pay NICs (National Insurance Contributions) and income tax.

How do I pass an IR35 assessment?

To pass an IR35 assessment, a few things need to be confirmed.

Can a contractor appeal the IR35 determination?

No. If a contractor disagrees with the IR35 determination, they need to bring it up to HMRC if they wish to challenge the decision further.

If you want more specific information, feel free to book a call with our experts!