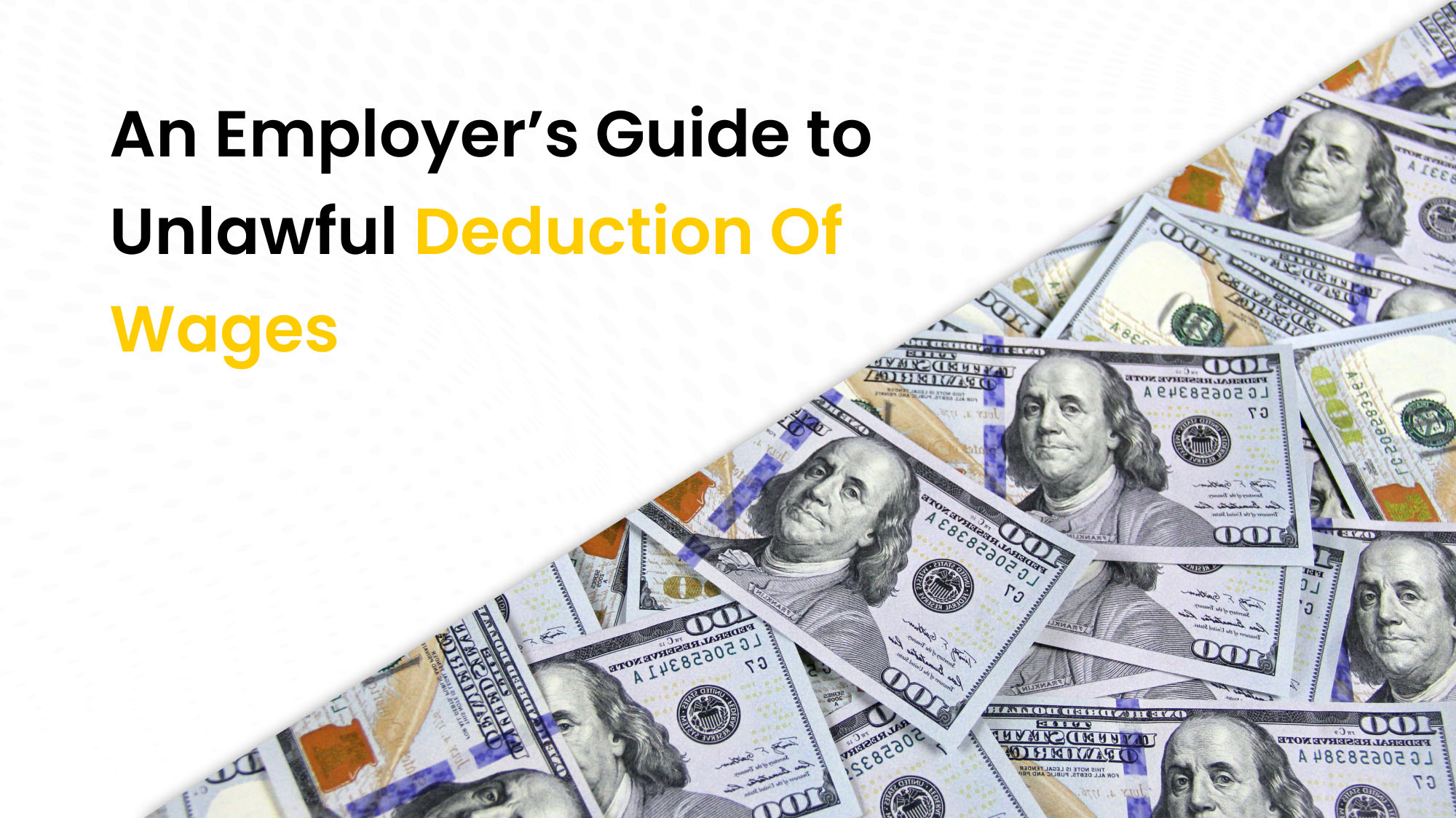 An Employer’s Guide to Unlawful Deduction of Wages

Unlawful deductions of wages claims could be filed against you if an employee claims you illegally deducted money from their paycheck. What are your legal options if this happens, and how can you avoid future conflicts with your employees? That’s what we are going to take a closer look at here.

What Constitutes an Unlawful Deduction of Wages?

Only one of two reasons can be used to deduct money from one of your employee’s paycheck:

Alternatively, if the employee has consented to the deduction/s being made.

So, if you’re wondering if you, as an employer, can deduct money from your employees’ paycheck, the answer is yes, but only if the deductions meet these two legal requirements.

Any other deduction, by extension, will be illegal.

The obvious answer to that question is the money an employee gets every week/fortnight/month after plenty of hard work. The law has its own definition though, and that’s what is important here.

The legal definition of wages in the UK is:

Wages, then, cover a wide range of payments to which people are entitled to as an employee or worker. This obviously includes regular pay, but it also includes bonuses and commissions (even post-employment commission).

It is also important to note that it covers other statutory payments to which employees/workers are entitled. Examples include:

Wages also include compensation for time off work for which they are entitled. For example, employees have the right to be paid for time off taken to attend antenatal appointments.

What is Not Covered by the Legal Definition of Wages?

Certain types of compensation are not considered wages. Here are some examples:

Expenses aren’t paid in connection with most jobs, so they’re not considered wages. If you as an employer refuse to pay for unpaid expenses, an employee may be able to file a breach of contract claim with the employment tribunal (if their employment has ended) or County Court. To avoid these situations all policies on expense reimbursement should be clear, and understood by all parties.

While such payments are not considered “wages,” an employee can file a claim under Section 164 of the Employment Rights Act 1996 if you fail to pay their redundancy payment.

Payment in lieu of notice (PILON)

These payments are not wages because they are not contractually due for “the provision of service” while a person are employed. However, a claim for unpaid PILON can be filed as a breach of contract or wrongful dismissal claim, so tread carefully.

Do Bonuses Count as Wages?

If an employee has not been paid a contractual bonus, they may be able to file a claim for an unlawful deduction from wages. It is less clear with discretionary bonuses, and it is dependent on the circumstances and terms of the bonus scheme. You should probably seek legal advice in such cases, as these types of claims can be complicated.

If your business operates in the service industry, you are most likely have staff who earn tips, gratuities, or a percentage of tronc.

An employee can file a claim for unlawful deduction from wages if you, as an employer, seems to be keeping such payments from them.

Their tips, gratuities, and tronc share are all part of their pay, and an employer cannot use them to meet their National Minimum Wage obligations since the law changed in 2009.

Need to make pay cuts to see your business through a rough patch? It’s not as easy to do that as you may think.

If you want to make a pay cut for a member of your staff, you must first obtain their permission. You’ll need to write it down for them as well as your own records.

Employees have the option of rejecting your proposal and working under duress. They may also resign if they believe you have violated their contract. It is also within the employee’s rights to compose a grievance letter about illegal wage deductions.

If the employee does not agree to the pay cut terms, you can terminate their current contract and begin a new one with them. This could result in a claim for unfair dismissal, which could lead to a hearing in front of an employment tribunal. In this case, you’d be able to claim a just dismissal because it was for the greater good of your company.

Payroll errors can occur, resulting in overpaying employees. What are your rights if this happens, and can you get your money back?

To avoid a conflict with an employee that could lead to legal action, it’s critical to take the right approach. First and foremost, double-check that you have truly overpaid an employee. Payroll or a staff member may have reported the overpayment, but double-check to make sure.

You may be able to reclaim money if they were overpaid. The sooner you act to correct this, the better—you’ll need to notify your employee right away. A contractual claim, on the other hand, must be filed within six years of the overpayment.

If you file a claim after the six-year period has passed, a judge will have to extend the limitation period, which he or she may do if the judge thinks it is fair. In many cases, if it has been six years, your company may have to accept the error and move on. Pursuing overpayments at that point could be much more expensive than the amount owed.

Talking to Employees About Overpayment

When employees are overpaid by their employers, they may believe they are entitled to keep the money. And by the time the error is noticed, it’s likely the money has already been spent. When the truth is revealed, they may become defensive about returning it. They could even look into whether they can keep the money if an employer overplays them, as well as their legal options if they refuse to refund such a proven overpayment.

Don’t deduct the amount from their future wages automatically to avoid upsetting your employee and/or jeopardizing your own legal position. You have the option of reclaiming a genuine overpayment, but you must do so in a way that is fair to your employee. They haven’t done anything wrong, after all. In speaking to them:

Wage deductions can be made in one lump sum or in several installments. If there is a significant overpayment, the latter may be preferable to avoid disputes. This recovery period should be communicated to your staff member in writing.

Overpayment is not uncommon in smaller businesses, just one of the reasons why it may be best, even as a small firm, to outsource your payroll to an independent accounting firm like Pearl Lemon Accounting.

How to Calculate Corporation Tax in the UK